Is it safe to sleep with windows open at night?

Sleeping with your window open at night, seems like a no brainer. Who doesn’t want better airflow and ventilation and the ability to control the temperature in your bedroom? In fact, the benefits of sleeping with a window open at night can have a massive impact on your general health and wellbeing, leading to better sleep, which means you’re better able to deal with everything life throws at you over the course of the day. This in turn begs the question, why doesn’t everyone sleep with the window open? While there are a number of reasons why you might choose to keep your windows closed, for most people the biggest concern they have is the question, is it safe to sleep with the windows open at night?

When you consider that a ground floor window is the second most common entry point for burglars after the front door, the short answer appears to be, “no”. However, it isn’t quite that simple, a few simple safety precautions can greatly reduce your chance of being burgled, but before we get into safety solutions, let’s take a look at some statistics to better understand the issue of safety as it relates to open windows.

According to FBI Crime statistics a burglary occurs every 26.2 seconds in the US, equating to more than 3 300 burglaries per day. This is a staggering amount of break ins, and when you consider this prevalence, it is no surprise that more than 62% of surveyed Americans list a burglary as their single biggest property crime fear. Another interesting statistic, which at first seems counterintuitive, is that burglaries are far more common in rural areas than in cities. New Mexico, Mississippi, Louisiana and Oklahoma lead the way with more urban states like New York and California appearing near the bottom of the list. In 2018 alone, New Mexico had 768 burglaries per 100,000 people compared to New York, where there were only 159 burglaries per 100,000.

So, what do these numbers and figures mean for the question of whether you should sleep with your window open at night. In amongst all these scary statistics there are two that support the idea of keeping your windows open. The first is quite surprising, according to crime statistics the majority of burglaries occur during the day with only 32% of burglaries happening at night. While we all have the image of the cat burglar striking under the cover of darkness, burglars are far more likely to gain entry during the day when no one is at home. Perhaps the most comforting statistic to come out of the research conducted by safewise.com is that burglaries are actually on the decline, with the amount of recorded burglaries falling by 18% between 2017 and 2018 according to the FBI Crime Statistics.

While the statistics above seem to paint a rather scary picture, a little home security can go a long way in helping to keep you safe at night. And while home security services can be expensive, when you consider that the average burglary costs Americans around $3000, a small investment in your safety is a prudent financial move. And while there are many ways to secure your home, if you are simply looking to keep a window open at night, then an open window lock such as those provided by LockLatch is one of the most affordable and affective solutions. These ingenious devices fit easily onto any window you want to keep open, but securely locked in place providing all the benefits of an open window while also letting you sleep with total peace of mind.

LockLatch (and it’s smaller version MiniLatch) are adjustable meaning you can control how wide you leave your window open and the C304 Stainless Steel construction means the open window lock will keep opportunistic burglars out while your room stays cool and well ventilated for the perfect night’s sleep.

And while we can go on and on about these ingenious devices, we prefer to let our customers do the talking, so we’ll leave you with the words of a few happy LockLatch users from around the world.

Why Our Fans Love LockLatch

LockLatch, The Cat Door Solution That Saves You Time & Money 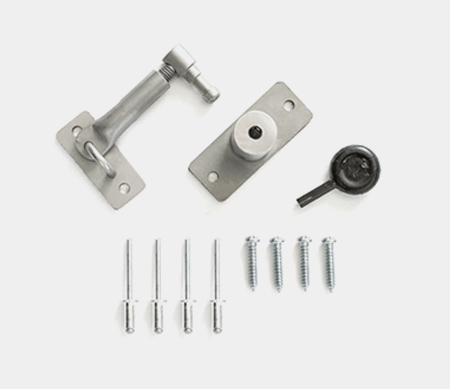 Welcome! We use cookies on our site to improve customer experience. We don't store any personal data that you don't provide.
By using the site you agree to use cookies. You can read more in our privacy policy.